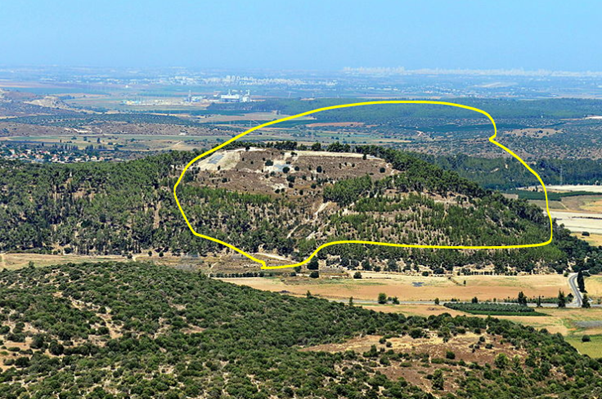 “The Philistines have assembled their camps for war…. They encamped between Socho and Azekah…in the valley of Terebinth…The Philistines stood…on one side and Israel stood…On the other side and the valley was between them…A champion came out…Goliath of Gath (1 Samuel 17 : 1 -4).”

One of the benefits of living in Israel is the ability to wake up every morning, look out the window and see where the most famous battle in the world took place! Of course, I’m talking about the clash between David and Goliath. Even if someone does not know the Bible well, it is very unlikely that he has not heard of this epic duel. Even today on the sports networks when the best team faces an underdog team, advertisers will compare it to “David vs Goliath”.

Today we visit an off-the-beaten-path site, Tel Azekah, a biblical-era Israelite city that was given by Gd to the tribe of Judah (Joshua 15:35).

After Joshua and his army defeated the city-states of Jericho and Ai, the mighty city of Gibeon made an alliance with the Israelites (see previous article on Hazor where I discuss the structure of the Canaanite city-states Tel Hatzor). Five Canaanite kings attacked Gibeon, to send a message that making peace with the Jews was not in their interest. When they attacked, Joshua felt bound by his oath and came to their aid. As the armies of the 5 kings saw him coming, Gd struck panic in their hearts and they were smitten, with the survivors fleeing to Azekah, where a hailstorm finished off the rest (Joshua 10). According to Jewish sources, this was left by the plague of hail in Egypt. When Moses asked Gd to stop the plague, the remaining hail was saved for Azekah.

When the Babylonians conquered Israel centuries later, the last three cities to be conquered were the besieged cities of Jerusalem, Lachish and Azekah (Jeremiah 34:6-7). Indeed, the excavators found a letter written by soldiers in Lachish, to be sent as a warning to fighters in Jerusalem, which read “We can no longer see Azekah’s fire signals”. This “Lachish Ostraca” confirms the biblical account which says that these are the last three conquered cities.

The main reason I take people to this site is to relive this famous biblical battle between David and Goliath the Philistine.

Who were the Philistines we talk about so much in the Bible?

The Philistines were from Greece. From around 1200 BCE, for the next 800 years, the Greek peninsula went through a depression called the “Greek Dark Ages”. A certain Sea People left Greece and settled in Crete, where civilization had not yet collapsed. Due to volcanoes and unrest, these sea people were again uprooted. About 220 years before, Egypt controlled Canaan, with the kings of the city-states being tributaries. With the collapse of the Egyptian empire, caused by the exodus from Egypt (where Pharaoh’s army was drowned), there was suddenly a vacuum left with no empire running the show. The Jewish people entered through the Jordan River opposite Jericho (see the yellow circle in the image below) and took control of almost the entire mountainous region (see the large red circle below). The Philistines entered by sea and took control of the entire coastal area (see below the dark green flat area between the red circle and the sea).

Although the Philistines had superior weapons (due to the fact that they were one of the leading makers of deadly iron weapons), they were unable to conquer and hold the most mountainous region, because their chariots required flatter ground (Judges 1:19).

The Philistines curiously entered Judean territory to wage war with confidence, even though they had just suffered a crushing defeat at the hands of King Saul (1 Samuel: 14). Equally strange, Saul and his men were too scared to fight. According to a Jewish source, Gd did it this way in order to bring King David into the picture, putting him in a position to succeed to the throne. G‑d had just told Saul that the kingship would be taken away from him (1 Samuel 16).

Philistines mobilized in Socho (see map above with black scribble) and Jews in Azeka (blue scribble above) and the Terebinth Valley, which takes its name from the abundant trees growing there, was between them.

Every morning for forty days, the mighty Goliath (just under 13 feet tall and covered from head to toe in heavy armour) approached the Israelite camp and said, “Choose a man and let him come down to me. If he can fight me and kill me, we will be your slaves. And if I defeat him… You will be our slaves (1 Samuel 17:8-9). As a side note, one can clearly see the Greek origins of the Philistines. Nowhere in history, outside of ancient Greece, have there been wars between two heroes with “winner takes all” stipulations affecting the entire nation.

Meanwhile, Jesse asked his son David, who was tending his sheep in Bethlehem, to watch three of his older brothers on the battlefield and bring them provisions (in ancient armies it was not uncommon for soldiers supply their own weapons, clothing, food, etc.). When David arrived, he saw a frightened army. The situation was so dire that Saul promised anyone who could kill his daughter Goliath’s hand in marriage (which meant wealth and position in the royal court). When David heard Goliath dishonor “The Battalions of the Living God”, he was disgusted and wanted to strike down the Giant himself. He started asking what the king’s reward would be for killing the giant. He already knew the answer, but wanted to engage people in the discussion, hoping that word would come back to the king David wanted to fight.

The news got back to Saul and he summoned David. He said “You cannot go forward…to fight with him, for you are a boy, while he is a warrior from his youth (1 Samuel: 17:33)” In ancient times, for being in this type of battle, one expected to have at least a decade or two of war experience, while he had none. David replied, “G‑d…will deliver me from this Philistine. When Saul heard this level of faith, he said “Go, and God be with you (Ibid 17:37).”

David went to the stream in the valley and picked up 5 “smooth” stones.

David put a single stone in his sling, aimed it at Goliath, and struck him, causing him to crumble. David then cut off the giant’s head and the Philistines fled, thus removing for a long time their threat against Israel. David married Michal, Saul’s daughter, and with David now in the royal court, G‑d had prepared the ground for David’s ascension to kingship.

I highly recommend visiting Azekah and the Terebinth Valley on your next trip. Besides being historical and biblical, it offers some of the best scenic views and wildflowers in Israel. Along the way, we can even stop at the stream, where you can pick up one of the stones and take it home!

All images used are either for free use or licensed by the author for commercial use.