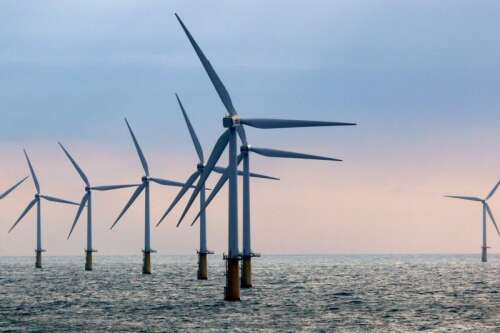 Breath of fresh air: An offshore wind farm could supply the island with electricity, according to the latest report (Photo provided)

Two locations have been identified as possible sites for an offshore wind farm, according to a first report.

But more studies need to be done before we can decide whether the project to bring sustainable energy to the island is viable.

The report, produced Ricardo Energy and environment and commissioned by the Regulatory Authority, recognized that practical and commercial obstacles “would make any offshore wind development particularly difficult”.

The challenges included the layout of the cables, the need for a floating foundation, potential interference with shipping lanes and fishing grounds, and the visual impact “which would further hamper the cost, acceptance or even feasibility of the project. “.

If the Challenger Bank option is now ruled out, the other two sites are “economically attractive”, according to the study.

The recently completed report concluded: “In view of the results of site 3 [Challenger Bank], it seems highly unlikely that a floating offshore wind farm project will be financially or even economically competitive with other generation technologies previously considered in the Bermuda Integrated Resource Plan.

“However, the discounted cost of electricity calculated for sites 1 and 2 [The Lagoon and Main Terrace] remain economically more attractive than those calculated in the IRP for alternative technologies, including those based on heavy fuel oil.

“Both sites one and two have reasonably good potential to contribute to Bermuda’s decarbonization program.”

The report acknowledges that further studies need to be carried out “in order to further demonstrate the feasibility of the project and to help reduce the development risks of the project – two elements considered essential to attract developers and to minimize future electricity prices. “.

He noted, “This study cannot firmly confirm the feasibility of either site as significant uncertainty remains, including whether to agree to proceed or support major stakeholder groups for the identified locations, the lack of previous studies focused on the exact nature of the seabed composition, or the lack of “bankable” wind measurements for the selected sites.

He went on to say that a detailed seabed assessment should be carried out “to determine if it would be capable of accommodating fixed foundations or floating foundation moorings, as well as an offshore platform.”

He said: “In addition to this, a study of the potential route of the cable would also be necessary to ensure that the cable path would not encounter topographical or environmental constraints that have not been identified.”

He also noted that wind measurements should be carried out at the most promising potential site for at least a year, and that the government should begin “a process of consultation with relevant stakeholders”, including environmental and tourism organizations. .

Home Secretary Walter Roban said the island “has the potential to be a centerpiece of conservation and efficiency”, with multiple suppliers creating “an environment where energy independence is possible”.

Commenting on the report’s findings, a spokesperson for the Regulatory Authority said: “The Integrated Resource Plan identified the need for a wind pre-feasibility study, which RA is currently developing.

“The first step, which was a desk study, was recently completed and concluded that we needed to move on to the second phase of the wind survey and conduct geophysical and geotechnical studies to assess the seabed at various locations.

“The second phase of the wind study involves a large-scale weather study that potential developers can access. Once the meteorological study begins, it should collect data for a period of at least 12 months.

“The continuation of the wind studies is part of the work plan of the AR for this exercise and the next one. Once completed, the tendering process will begin.

The full report can be read here.