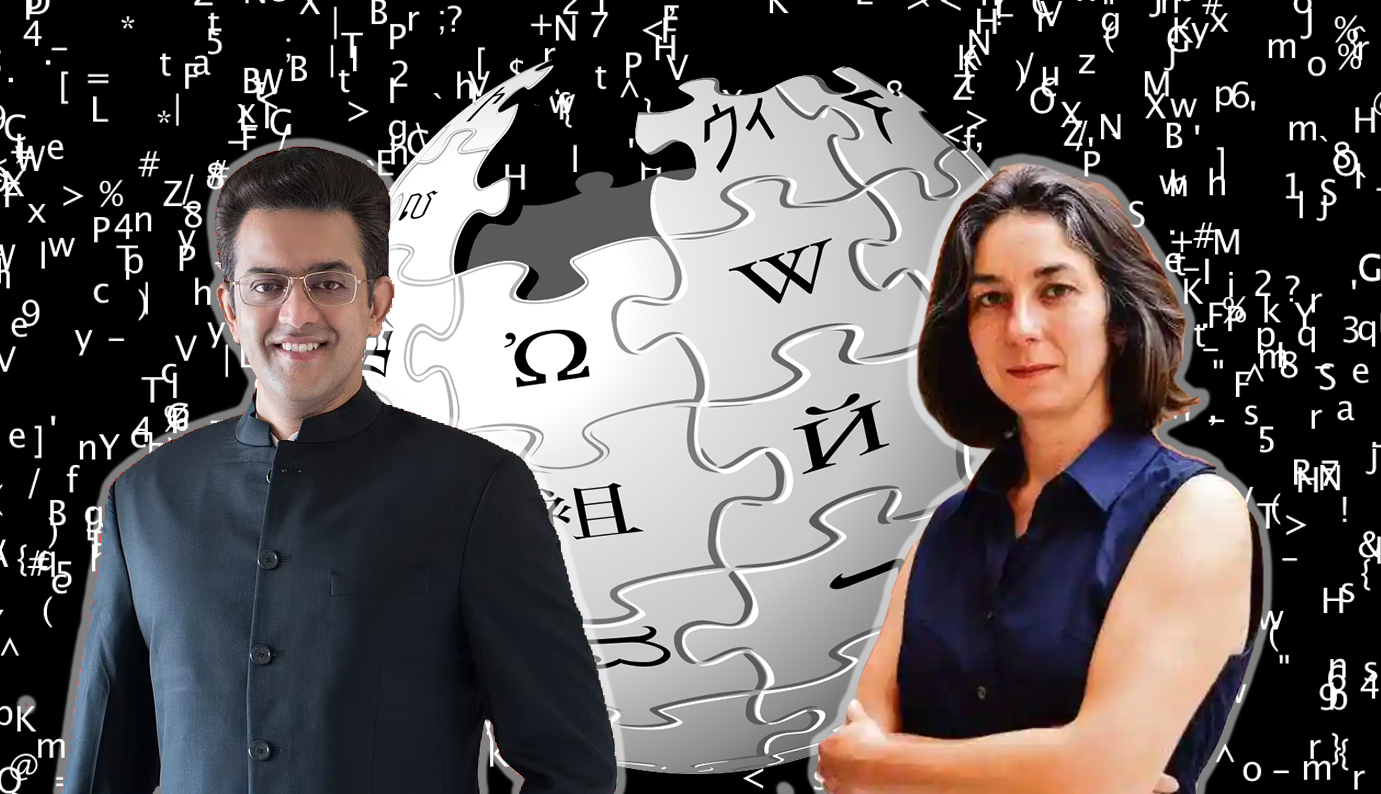 Historian Vikram Sampath has come under attack from leftists and Islamists in recent weeks, making false claims of plagiarism against him. It was led by three professors from American universities, Ananya Chakravarti, Rohit Chopra and Audrey Truschke. While the allegations turned out to be false, Hinduphobic professor Audrey Truschke has now launched a massive attack on Sampath, including vandalizing her Wikipedia page.

It was highlighted by Vikram Sampath himself on February 27, when he tweeted that his Wikipedia page had been vandalized by an editor with a history of vandalized India-related pages.

Even as the forged signatures unravel, Trangabellam continues to vandalize my @Wikipedia pg, which she recognizes with joy👇. Note Trangabellam created Dr. Truschke’s page; vandalized @sanjeevsanyal ‘s page & also Balakot strikes!! Are they the same person – AT & TB: alter-egos? pic.twitter.com/0ByGymX8VU

Vikram Sampath’s Wikipedia page has seen hectic edits over the past few weeks, and every random allegation made against the historian has been added to the article. Although Wikipedia’s rules state that only verified information backed by credible sources should be added to its articles, unsubstantiated claims and clear opinions have been added to the page, mostly by an editor with ID TrangaBellam, such as a Scroll article titled “How historian Vikram Sampath uses the rhetoric of decolonization to make sense of Hindu rule”.

As Audrey Truschke continued to make accusations against Vikram Sampath, all of them were updated on the Wikipedia page. And interestingly, the professor herself proudly announced that her allegations against Sampath had made their way to Wikipedia.

Oh look, someone has a nice section added on plagiarism allegations.https://t.co/wYEVrE9vmM #satya

It should be noted that the edits to Wikipedia were made near real-time, meaning they were added to the page immediately after the allegations were made against the historian, completely violating Wikipedia’s policy of publish only verified information.

The page had added details of an “open letter” against Vikram Sampath allegedly signed by several people in India and around the world, the majority of which turned out to be fake.

Audrey Truschke had tweeted about the letter, saying “more than 75 concerned academics” had signed it.

Open letter of support by more than 75 concerned scholars for Drs. Ananya Chakravarti, Rohit Chopra, and Audrey Truschke regarding their service to the profession and academic freedom by drawing attention to the plagiarism of Dr. Vikram Sampath. https://t.co/4GO10qC9PY

However, after several ‘signatories’ of the letter including Ramchandra Guha, Pratap Bhanu Mehta, Sanjay Raut etc. clarified that they had not signed it, the reference to the letter was later removed. It should be noted that actually Ramchandra Guha’s name was not even in the letter, a Ram Guha name was there. But the Wikipedia editor assumed it was Ramchandra Guha and added that he signed the letter before deleting the entire paragraph.

Later, it was discovered that Audrey Truschke’s “open letter” was filled with a forged signature, and there is no mechanism to verify the identity of the signatories to make such serious allegations against Sampath. It was just an open Google document that anyone could sign by giving any name.

However, even after it was fully proven that most of the signatures on the open letter were forged, and that they were added either by Audrey Truschke or someone from her team, the Wikipedia editor, TrangaBellam, refused to believe him. While one name after another, whose names appeared in the letter, clarified that they had not signed it and had not even seen the letter before, the editor claimed that it was “not a fake”.

In the article’s talk page, when a user pointed out that the letter was forged, TrangaBellam said he removed the reference to the letter, but added, “It was not a fake, but a wacky way of using technology”. . The editor implied that Audrey was unfamiliar with the technology, so she created the open letter in a way that anyone could sign it using any name. This begs the question, how does TrangaBellam know that Audrey Truschke isn’t good with technology, do they know each other personally?

Plus, it’s a shocking defense of an open fake made by Audrey Truschke, and proves that publisher TrangaBellam is very biased towards the professor, whom she might know personally. Therefore, the editor should not even be allowed to edit Vikram Sampath’s page as he has a vested interest in defaming him.

Several editors also rightly pointed out that the section on plagiarism had become too large compared to the overall article. Vikram Sampath’s Wikipedia page is very brief, but the new section added to it has more than doubled in size. They said a 300-word section on plagiarism allegations was too much for a 570-word biography. But TrangaBellam dismissed all such arguments, saying “coverage of ‘alleged plagiarism’ is steadily increasing”, pointing to media reports of the allegations and the historian’s case filed against her in the Delhi High Court.

There are more arguments from TrangaBellam showing he is openly biased against Vikram Sampath, and he showed the most interest in editing the historian page to add as many unverified allegations against him as possible. In fact, reacting to Sampath’s clarification of the allegations, the editor said, “I do not accept Sampath’s arguments.”

After several prominent left-liberal figures said their signs had been fraudulently added to the letter, Audrey blamed “Hindu right-wing computer cells” for vandalizing it.

Social media user Soumyadipta also recorded the vandalism of the Wikipedia page by Audrey’s team, and said that because of this, her IP address was blocked on the site. He alleged that TrangaBellam is part of a team of Wikiepedia editors, some of whom have administrator rights, and therefore can block people who expose them.

Alert: Wikipedia administrators blocked my IP address after accessing my profile.
Vanamonde93 and Newslinger are both administrators and have these rights.
They might be after you too.
If you interacted with me citing specific conversations with Kautilya or TrangaBellam, please delete it pic.twitter.com/Z3HfUHVmPw

Most of the edits against Vikram Sampath in the Wikipedia page are made by a single editor, TrangaBellam, who has a habit of vandalizing Wikipedia pages to defame India and Hinduism. Whenever a Wikipedia adds a single line that seems to be favorable to Vikram Sampath, that editor pops up and undoes the edits. And every time an allegation against Sampath appears, the same editor adds that even without checking the facts.

Audrey Truschke’s Wikipedia page was created by this editor, and seems to regularly maintain the page of the Hinduphobic professor. This again points to the possibility that the two could be linked beyond Wikipedia.

This incident of Wikipedia editor TrangaBellam being biased towards Professor Audrey Truschke, a leftist Hinduphobe and Aurangzeb apologist, is just one example of the wider problem with Wikipedia, its editors and moderators being dominated by leftists and Islamists. Time and time again we have recorded such Wikipedia bias, and it has been confirmed by none other than Wikipedia co-founder Larry Sanger, who is no longer with the organization now. He had repeatedly said that no one should trust Wikipedia because the site has been taken over by leftists who reject content that doesn’t fit their agenda.