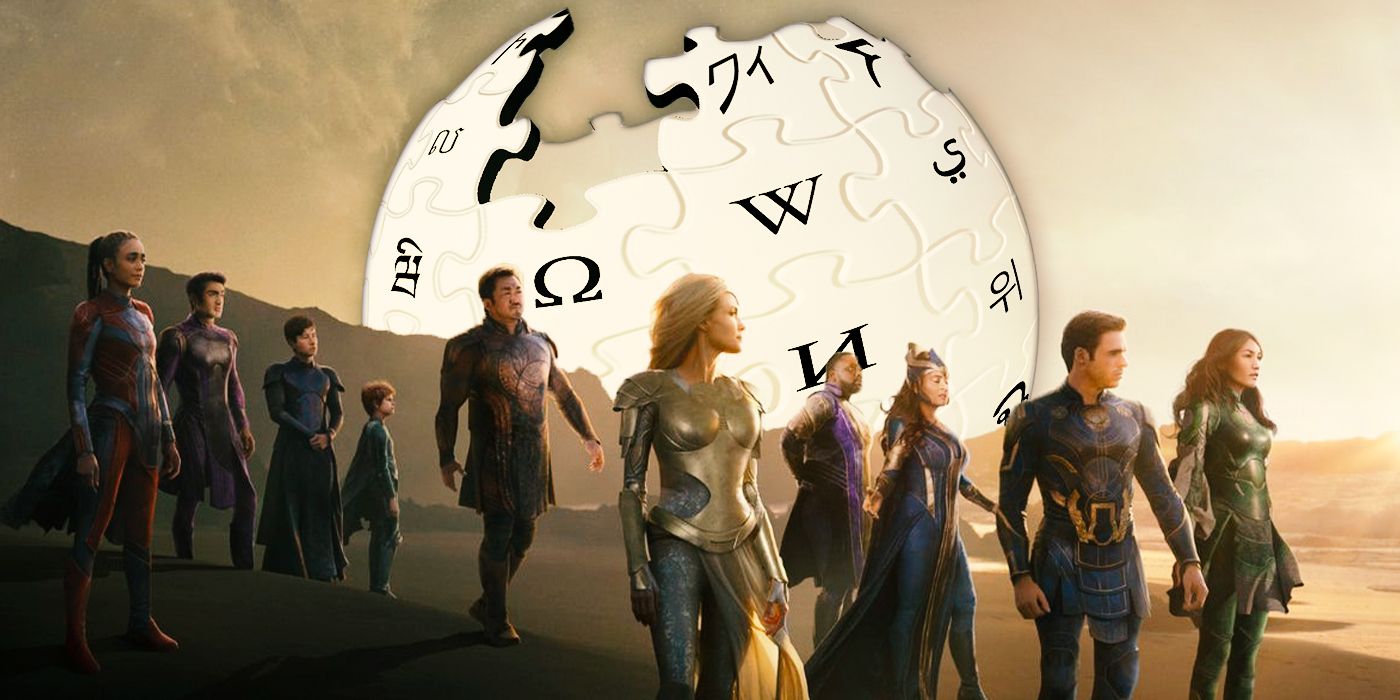 A fake plot synopsis for Marvel’s Eternals is posted on Wikipedia and left on the website for over six hours before being deleted by admins.

A few days before its theatrical release, a fake plot synopsis for Marvel’s Eternals was posted on – and subsequently removed – from the film’s Wikipedia page.

As one of the most visited websites on the internet, Wikipedia is arguably the most popular way to get quick information on hot topics. However, because it can be edited by anyone, at times it can display some high-profile inaccuracies. One of those flaws featured a very detailed – but very fake – plot recap for Marvel’s Eternals. This fictitious description was posted on the website for just over six hours before it was found and deleted. As preserved by The Direct, the summary took inspiration from real promotional material and then fabricated quite a plot, including a detailed breakdown of why the Eternals are fighting the Deviants, where they’ve been hiding during all of these years and who dies.

RELATED: Eternals Producer Explains Why The Movie Is One Of The MCU’s Most Standalone

Also among the “spoilers” are fake mid-credits and post-credits sequences. The fabricated mid-credits scene would have theoretically revolved around Kit Harington’s Dane Whitman becoming the Dark Knight by picking up the Ebony Blade, the source of his power in the character’s appearances in the comics. Next, the post-credits scene would have featured Thanos’ brother Eros. Also known by the code name Starfox, the fake ending is said to have brought Eros to the remnants of the Avengers headquarters. There, he allegedly found Thanos’ ashes and vowed revenge for his death.

While these fabricated plot points are ultimately little more than elaborate fan theories, there are some very real spoilers for Eternals floating on the Internet. After the film premiered on October 18, a member of the press leaked plot details online, including the post-credits scene. This information infuriated fans and the team behind the film. No stranger to spoilers since his time Game of thrones, Harington expressed his disappointment and said: “Let people go to the movies and experience it when they pay their ticket and do it that way, rather than stream it online where they might not go. reckon they stumble upon things. “

This incident is the latest in a series of problems that plagued Eternals in the weeks leading up to its release. A number of IMDB users ‘bombed’ the film for having proud LGBTQ + characters in its main cast, prompting star Kumail Nanjiani to make a statement supporting the film. Although these were removed, the bad reviews continued as more critics stepped in, citing issues like pacing, boring characters, and an ill-equipped director in Chloe Zhao. These reviews resulted in Eternals becoming the first installment in the Marvel Cinematic Universe to be “Rotten Certified” on review aggregator Rotten Tomatoes.

Fans who want to experience the real plot of Eternals can see the film in theaters from November 5.

KEEP READING: An Eternals Trilogy Could Happen, But Marvel Isn’t Planning One Yet

Henry Varona is a writer and comic book connoisseur who never seems to take himself too seriously. He has worked with Midtown Comics, Multiversity and ScreenRant. Along the way, he’s collaborated with some of the biggest names in comics and movies, but never forgot what makes entertainment really special: the fans. He is passionate about wrestling, comics, action figures and pineapple pizza. You can find him on Twitter at @HAVcomics.