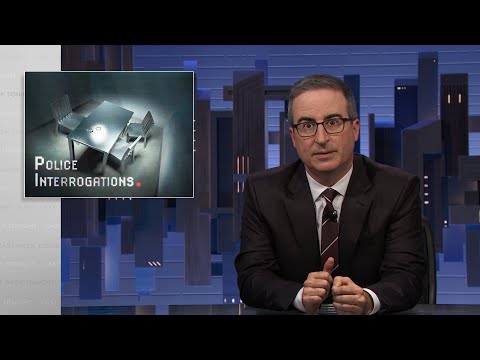 God help you if you lie to a cop. We don’t even talk about the court, where everyone swears to tell the whole truth, etc. before being subjected to testimony by law enforcement.

We’re talking about the interrogation that occurs after law enforcement decides that a person is a person of interest. The cops are terrible at solving violent crimes, so it’s up to them to get a “confession” by any means necessary. “Any mean” often means lying. But only cops can do that. If you lie to federal agents, it’s a federal crime. Lying to people suspected of committing federal crimes is simply considered good (government) business.

John Oliver – who has previously touched on (and ridiculed) a number of police lore – recently addressed the tactics (and lies) officers use to extract confessions from those arrested, including those who are innocent.

Here is the video:

Oliver starts by calling out the “Reid Technique.” It’s an interrogation technique developed by former Chicago police officer John E. Reid – a “polygraphy expert” (LOL) – who managed to get a technique named after him despite his race initial on a murder suspect immediately followed by a recantation. . Rather than beating a suspect into confessing, the Reid Technique introduced intense pressure, hours of uninterrupted interrogations and lies, lies, lies.

Reid hung [murder suspect Darrel] Parker approached the polygraph and started asking questions. Parker couldn’t see the movement of the hands, but every time he answered a question about the murder, Reid would tell him he was lying. As the hours passed, Reid began to introduce a story. Contrary to appearances, he says, the Parkers’ marriage was not a happy one. Nancy refused to give Parker the sex he needed, and she flirted with other men. One day, furious, Parker took what was rightfully his. After nine hours of questioning, Parker broke down and confessed. He recanted the next day, but a jury found him guilty of murder and sentenced him to life in prison.

Perhaps there was no more reason to believe the recantation than the forced confession. But only the confessions proved it. This was the result:

[Parker] was later declared innocent, after another man confessed and turned out to be the perpetrator.

It was too late. By the time Parker was found innocent, Reid had already converted his “technique” — the one that only managed to get a bogus conviction — into a business and was training cops on how to smuggle potentially innocent people into criminals. confession.

Reid died in 1982 but his technique lives on. He remains popular, despite his sketchy background, as Oliver points out as only he can:

The Reid Technique has become one of those things that culturally comes with being a cop, like their penchant for donuts or their complicity in perpetuating state-sponsored violence.

Cops are naturally result-oriented. And any result – no matter how it is achieved or how questionable it is – is still a result. In the minds of cops, a confession is a fact even if, years later, the confession turns out to be false.

A confession is considered unassailable, even though so many have been successfully assaulted over the years. Why? Because Reid’s technique (and cop instinct) leads officers to believe that no innocent person would even admit to committing a crime they didn’t. This assumption ignores what hours of intense pressure, deceptive interrogations, outright lies, and vague threats of prolonged incarceration do to the average person.

Compounding all of this is the Reid Technique’s supposed ability to determine guilt by observing the behavior of an arrested person. It’s just as ridiculous as the things that cops consider signs of guilt when doing traffic stops. Everything is an indicator of guilt, especially behavioral things that contradict other things. There’s simply no way to “appear” innocent, as Oliver notes.

When it comes to eye contact, [the Reid Technique] advises that “when a person is not honest, they cannot maintain direct eye contact”. But also others “can overcompensate by fixing”. Which means if you have eyes, you’re basically screwed.

The Reid technique may not have been used in all of these cases, but it certainly helped. As the Innocence Project reports, almost a third of all convictions overturned using DNA evidence were based on false confessions.

Has it stopped cops from relying on this technique or encouraged courts to stop relying on confessions that were essentially obtained under duress? Of course not. It’s cop business as usual.

What’s unusual is that we let the cops lie to suspects in this country. American Exceptionalism ftw:

Allowing the police to lie to suspects is crazy. Most countries don’t allow it, and for good reason: it’s far too powerful a tool.

Here in the United States, the end justifies the means. And that is unfortunately the case when the ends disintegrate under further investigation. If a cop can get a confession by pressuring, detaining a person for hours and lying to them directly, that’s a win for the LEOs. And they will win that victory every time, even if it means imprisoning the wrong person and allowing violent people to roam free. Hopefully, a discussion of this bullshit on the national stage will prompt police oversight to take a closer look at the interrogation tactics and track records agencies that use the Reid Technique (and other coercive methods) have accumulated. What is already recorded makes it clear, the cops would rather see one innocent man convicted than prevent ten guilty ones from going free.