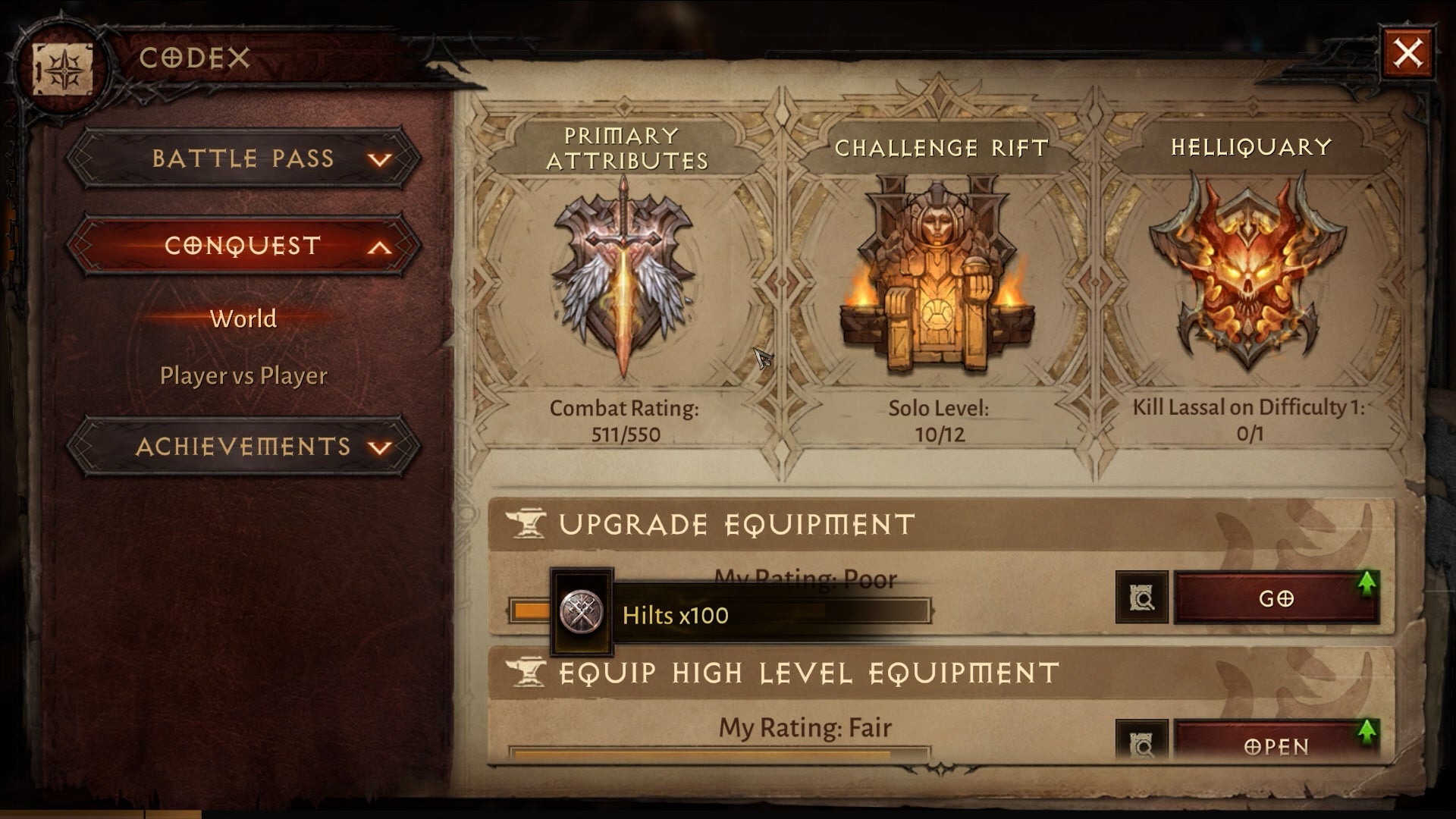 In Diablo Immortal, much of your progress is tracked by your Combat Rating, which aggregates all of your accumulated gear and powers into a number that can tell you at a glance if you’re ready for certain encounters. This page includes information on how to access and view your own battle rating, as well as how to increase it over time.

Where to see your combat rating

There are two easy ways to view your own battle rating. The first can be done by viewing your profile, which can be done by clicking on your own portrait and selecting the document search icon, or by viewing your inventory and selecting the armored figure icon at the bottom to left. This will allow you to see your attribute total, and when you select “More Attributes” it will show your combat rating. This can also be done when inspecting other players.

The second way is to check your Codex, under the Conquest tab. In the World section, the first large image shows your current battle rating, as well as your next goal (be sure to check back often as you level up your gear to be rewarded for hitting certain milestones with an influx of handles). There is also a secondary PvP combat rating under the Player vs. Player tab that tracks your life and damage total.

How to increase battle score

There are many different ways to become more powerful during your adventure, and each item can help you increase your combat score to the fullest extent possible. Breaking it all down, your combat rating increases in the following ways:

The most basic and easy to upgrade as you level up is to simply get better gear. The best level, rarity, and effects of all the gear you get will slowly but surely improve your combat rating as you level up from level 1 to level 60. Look for uncommon, then rare gear ( before you start finding legendaries as endgame gear) and always look for gear that has a green arrow indicating it will have a higher rating than what you currently have equipped.

You can get gear by doing just about anything in Diablo Immortal – quests, story, raids, events, rifts, and more!

As you acquire better gear, you’ll start to find plenty of it with sockets to insert gems into. Your primary gear (head, chest, shoulder, legs, weapon, off-hand) will eventually need legendary gems, but your secondary gear (amulets, rings, gloves, belts, boots) will only take normal gems. These include items like Rubies, Sapphires, Topazes, and more, and boost different ratings like damage, health, and armor – and will slowly increase your combat rating as you progress. they will be enshrined.

You can also improve the quality of gems by combining 3 of the same type to get a better rarity, which in turn will strengthen its effects.

Normal Gems are most easily obtained by searching for Hidden Lairs that periodically spawn in each area each day, until you hit the daily cap and no longer get Normal Gems for completing Tasks (and Tasks secondary) in hidden lairs.

Almost as important as the gear is how often you upgrade it. each blacksmith you talk to will loot unwanted gear in scraps, dust, and possibly glowing shards – and you can use these materials with gold to upgrade your gear to increase your attributes (which affects the combat rating), and these upgrades can then be transferred as you find better base gear.

At level 60, you’ll be able to upgrade your gear up to max level 6, and as you increase paragon levels from “Hell 1” to “Hell 2” difficulty and beyond, you’ll get more ranks to increase your speed by.

To get salvage materials, you simply need to scavenge armor or get them as Battle Pass rewards (or even purchased in small amounts from the Hilts merchant). Enchanted Dust can be obtained by collecting rare items or undertaking side quests that can appear in each area. Light Shards are much rarer as you will need to collect excess Legendaries or earn better rewards from dungeons.

A simple but effective item, Charms can be earned as a reward and equipped at level 56 to slightly increase the power of your skills, earning you a bit of Combat Rating in the process. Charms are rewarded by completing your daily Battle Passes, and sometimes also sold from the Hilts Trader.

One of the most important ways to increase your combat rating is to find and equip Legendary Gems. You can find them randomly when running Elder Rifts – although using the incredibly rare Legendary Crests will give you a random low level Legendary Gem. Many can also be crafted at the Gem Merchant in exchange for Runes which you can also find in Rifts.

Along with rewards from Rifts, Crafting, and Battle Pass, Legendary Gems are also sometimes sold by Merchant Hilts, and these can also be upgraded like normal Gems, although you must use a combination of Shards of unwanted gems and legendary gems to power your existing ones.

While Legendary Gear takes your primary gear, your secondary gear has variations called sets. When worn together, they give your class powerful bonuses and can have much better stats than rare versions.

Each week, your Battle Pass Codex will indicate which dungeons have a high chance of dropping Set Item Gear, and you should try to run these dungeons in your free time to find this gear and customize it.

Once you unlock the Helliquary weekly raids, you can challenge the bosses with a group of players so you can improve the difficulty and challenge of these raids. It will also give you passive bonuses to your combat rating and other attributes.

By becoming a member of The Shadows, you will be able to increase your rank and position with the PvP faction, which will reward you with each rank by increasing your damage and health up to a certain limit.

The Legacy of the Horadrim

The feature known as Legacy of the Horadrim allows you to continuously improve your character by finding ships and then increasing various aspects including life, damage, armor, armor penetration, resistance and the power. To do this, you will need to complete Challenge Rift 10 to start and be high enough (49) to access Iben Fahd’s shrine.

The first of the ships is rewarded at Tier 10 Challenge Rift, but you’ll need to get the rest by undertaking the various world bosses that can spawn in each area.

By finding the Aspirant’s Keys in different ways (Shadow Assembling, Shrine Enemies, Battle Pass Rewards, etc.), you can loot the chests at the end of the Shrine each day to get more materials to increase these statistics and your combat rating.

The final step in your journey to power doesn’t stop at level 60. You will be able to continue progressing through Paragon levels, and this will not only increase your overall combat rating, but you will be able to access unique levels. Paragon skill trees to deepen your skills and abilities.