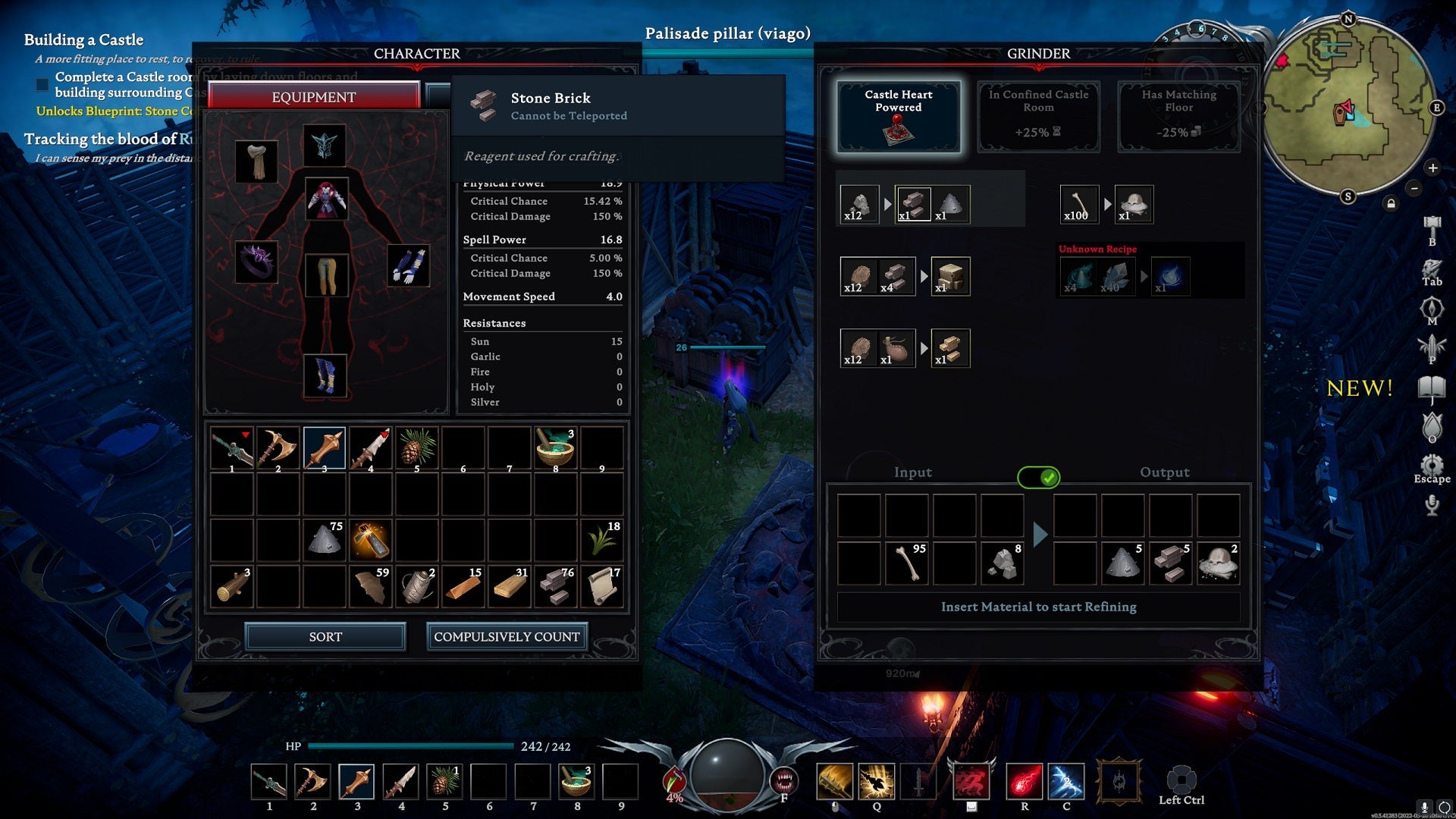 Stuck in the quest that asks you to get stone brick to build reinforced walls for your castle? Well you’ve come to the right place because this guide will teach you everything you need to know about how to get stone bricks, how to craft a grinder, and the best ways to find and mine whetstones in V. Rising.

Looking to complete a particular step in the journal quest? Click on the links below to access…

What is stone brick and what is it used for?

More importantly, you will need Stone Brick to build most floors in your castle. This is noteworthy because you won’t be able to complete the journal quest, Build a castlewithout stone brick.

How to craft a grinder and get a stone brick

Unlike many consumables, Stone Brick must be created in your castle using a grinder. However, to build a grinder, you will need 8 planks, 4 copper ingots, and 4 whetstones.. Planks are easy to craft if you have a sawmill and enough lumber. Copper Ingots can be crafted if you have a Furnace and are able to collect Copper Ore.

How to get and find whetstones

As for whetstones, if you go to a Bandit Armoryyou can collect whetstones from enemies, or they can be found in chests, barrels, and crates. A trip to a bandit armory should give you the number of whetstones you need for the grinder. Otherwise, enemies will respawn, allowing you to farm the Armory if you need to.

Another good aspect of the Bandit Armory is the fact that it is located just north of the Vampire Gate which is on the west side of the Farbane Woods area. If you die trying to tackle the bandit armory, coming back to pick up your items will be much faster than other locations.

Other places where Whetstones can be found include:

It should be noted that enemies in bandit armories in Farbane Woods are level 18-30which means you should have decent gear before venturing into these camps. At the very least, you should have the Plated Boneguard (Gear Tier 2) equipped or at least one piece of Nightstalker (Gear Level 3) or Ruthless Nightstalker gear (Gear Level 4). In addition to armor, it is also highly recommended to have some Copper Weapons (Gear Level 9) equipped to help deal more damage to high level enemies.

Once you’ve built the grinder, you’ll need 12 stones to make a stone brick. Since Stone is easy to find, you should be able to amass a large surplus of Stone Brick within a few days.

For even more V Rising guides, be sure to check out…

Following: How to find a coarse thread

Watch Nazi scum get shot, stabbed, blown up and more in this Kill Cam montage trailer that shows off Sniper Elite 5’s popular throwback feature, the X-Ray slow motion kill cam. Sniper Elite 5 will be released on May 26 on PC, PS4, PS5, Xbox One and Xbox Series X|S.

The Metaverse: What Does It Mean for Players?

We’ve all heard of the Metaverse, but what is it really? And what does this mean for gamers? We spoke to tech journalist Will Smith, Second Life creator Philip Rosedale, and The Washington Post’s Gene Park to get their thoughts on what this new frontier could mean for video games. Sponsored by Alienware.

Watch the trailer for Obi-Wan Kenobi, the limited series coming to Disney+ on May 25. The story begins 10 years after the dramatic events of Star Wars: Revenge of the Sith where Obi-Wan Kenobi had to face his greatest defeat: the fall and corruption of his best friend and Jedi apprentice, Anakin Skywalker, who turned to the dark side as the evil Sith lord Darth Vader. The series stars Ewan McGregor reprising his role as the iconic Jedi Master, and also marks the return of Hayden Christensen as Darth Vader. Joining the cast are Moses Ingram, Joel Edgerton, Bonnie Piesse, Kumail Nanjiani, Indira Varma, Rupert Friend, O’Shea Jackson Jr., Sung Kang, Simone Kessell and Benny Safdie. It is directed by Deborah Chow.