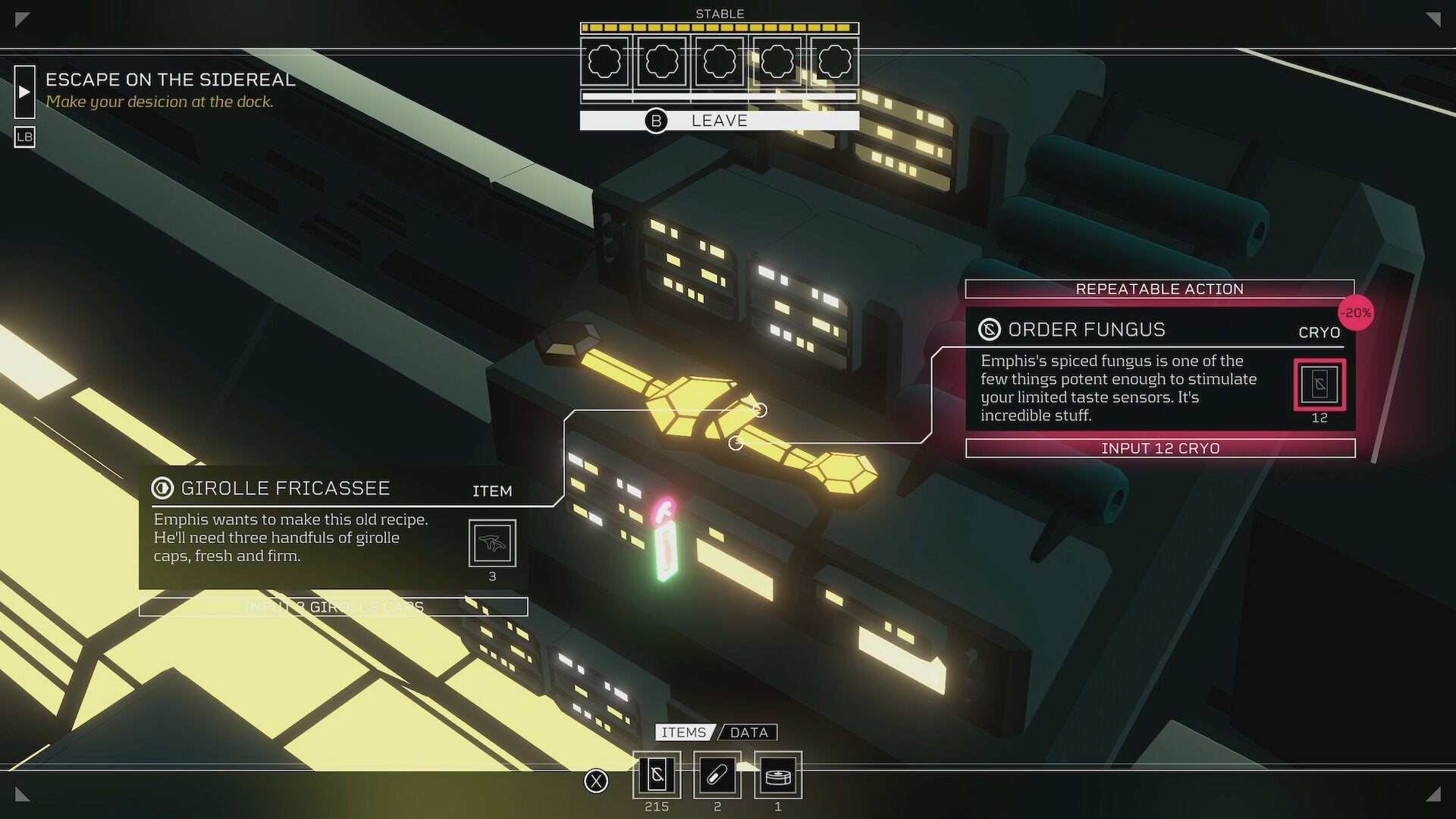 One of the first drives (or quests) you’ll likely encounter in Citizen Sleeper involves collection of Girolle caps for Emphis the food vendor. Although you are at the beginning of the game, there are quite a few steps to go through before you can complete this task. This guide will therefore detail the fastest way to get Chanterelle Caps and complete the questline of Emphis.

How to Start the Emphis the Food Vendor Questline

After the initial tutorials and you’re free to explore Erlin’s Eye, you’ll need to fill the Local Knowledge Clock in the Bright Market. After you start filling the clock by asking for directions or exploring the market, you’ll unlock a few more locations, the most important being Emphis’s Stall.

For 15 cryo, the in-game currency, Emphis will sell you food to keep your hunger meter full, though your first meal is free. Fill the Fungus Fan Clock by ordering food from him (which you’ll likely do naturally during the early game) and Emphis will then ask you to bring him Chanterelle Caps.

Where to find Girolle caps

Getting these caps won’t come cheap, you might want to wait for this quest until you have plenty of cryo (and time!) in your pocket. First you will need to pay 60 cryo to access Lowend from the north side of the eye, then another 150 cryo to access the ferry. This will allow you to travel to the other side of the ship,

Next, you will need to complete the clocks for ‘Going Green’ and ‘Sunlit Refuge’ which are clocks with six and twelve parts respectively. “Going Green” will be the first clock you have to complete, and while it’s the shortest, it’s also the most dangerous, as negative results will cost you Condition.

Use your best dice to fill this clock as quickly as possible; Sunny Refuge, however, will still grant you progress for your actions, even if you have a negative result.

Now that the Mushroom Groves can be used, it’s time to move on to the longer part of the quest. First, you will need to complete the Collect Spores action until you have three spores; these must be positive or neutral actions, negative ones will cost you energy. Once you have collected three spores, you can then germinate them in the aviary. After germinating all three spores, you will need to wait four cycles for them to grow.

Once the wait is over, you’ll have three chances to harvest mushrooms before you have to reacquire spores and start the process over. The only way to get Chanterelle Caps is to get a negative result; However, you will also need two Matsutake caps for the next step of the quest, which you can also receive randomly. You may need to grow the mushrooms two or three times before you get both the Chanterelle and Matsutake caps, so make sure you don’t start any urgent drives while you’re farming the necessary items.

Role-playing in the ruins of interplanetary capitalism, Citizen Sleeper immerses you in the life of a worker on the run, stranded on an anarchic station on the edge of an interstellar society. Explore the station, choose your friends, escape your past and change your future.