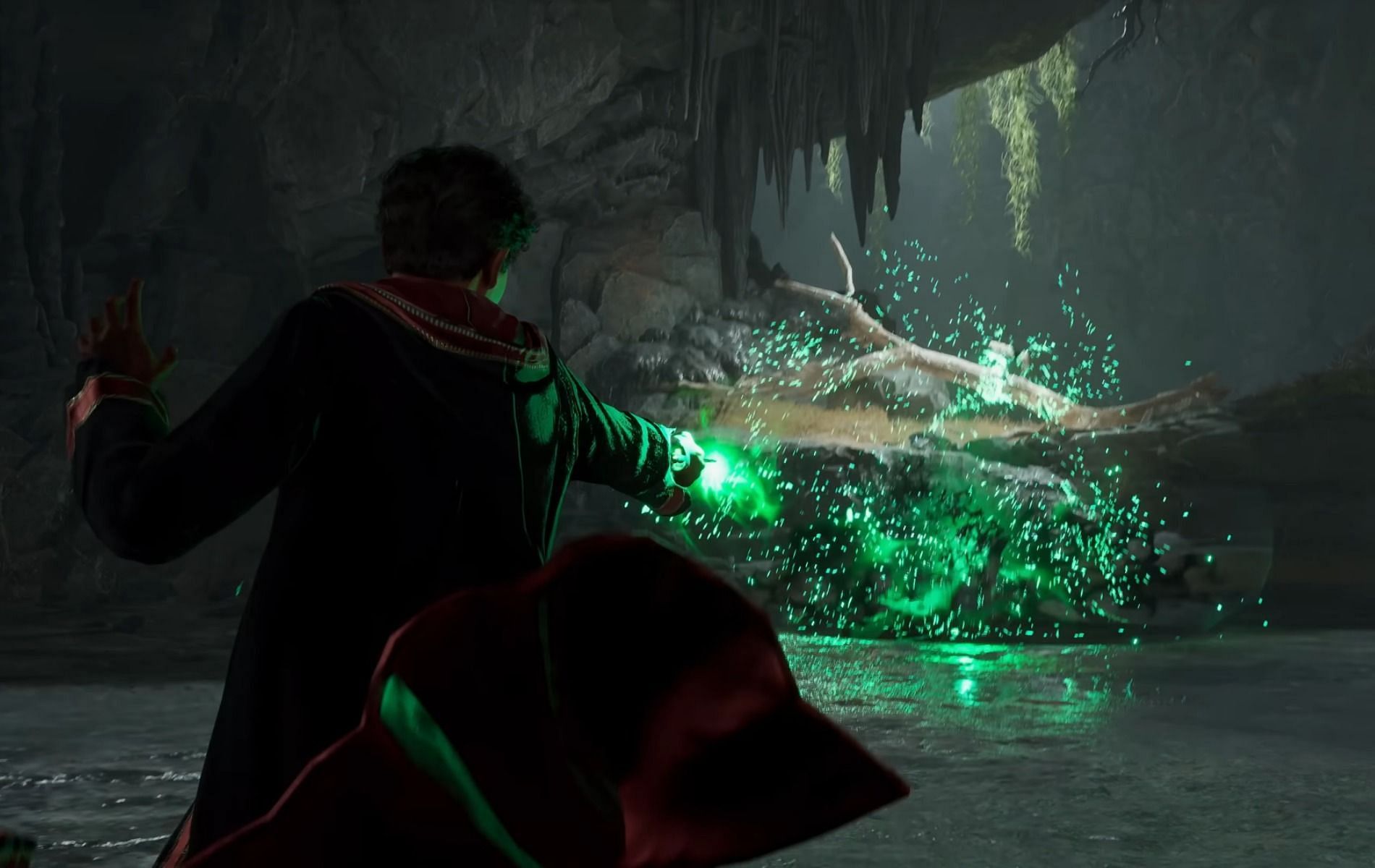 With the release period set for Holiday 2022, Hogwarts Legacy is still a long way off. Fans have been eagerly poring over the PS5’s 14-minute gameplay since the State of Play in March. The gameplay reveal provided a new, in-depth look at the game’s world, mechanics, characters, and more.

Players got a taste of Hogwarts fleshed out, with teachers, students, a plethora of magical beasts, and lots of magic.

One of the most interesting images in the clip that got the Harry Potter community talking was when the protagonist cast an unforgivable curse. Since then, fans have been enthusiastically discussing the extent to which Hogwarts Legacy gameplay will feature this powerful spell.

The gameplay reveal showcased a plethora of spells. Dueling mechanics are an important part of the game, and players will be able to combine various spells to counter enemies and other obstacles. But what excited fans the most was seeing the protagonist cast one of the Unforgivable Curses.

Around the 14th minute of the PS5 gameplay reveal, the iconic green spell shoots from the protagonist’s wand towards an unidentifiable enemy. Hogwarts Legacy would feature a morality system, so fans eagerly discussed whether the widespread use of the death curse would make their character evil.

From the Harry Potter wiki:

“They [Unforgivable Curses] were tools of black magic and were first classified as “unforgivable” in 1717, with the strictest penalties attached to their use. The three curses consisted of the Death Curse (Avada Kedavra), the Cruciatus Curse (Crucio), and the Imperius Curse (Imperio).”

These sinister curses are some of the most powerful spells in wizarding lore, they are primarily and indiscriminately used by dark wizards. Using any of these curses would immediately land the wizard or witch in Azkaban with a life sentence. Only Aurors were allowed to use them during the Wizarding Wars.

Potterheads will remember that Harry Potter himself used two of the three Unforgivable Curses, Cruciatus and Imperius, during the original saga without facing any repercussions. Likewise, the need of the hour can exempt the protagonist of Hogwarts Legacy from any sort of punishment if they use the spell for the greater good.

Fans think it’s highly unlikely that the developers will allow players to freely use the Death Curse, given its scale and the repercussions surrounding it. They think it’s more plausible that the option to cast Avada Kedavra will be available at crucial moments in gameplay, where players will have the chance to kill their enemy, thus affecting their morality.

A Redditor notes that the Death Curse was shown during a cinematic cutscene, rather than as part of normal gameplay. It further casts doubts on whether fans’ evil wizard fantasy will come to fruition in Hogwarts Legacy.

Another Redditor predicted that the recipient of the curse in the gameplay reveal was not human; more likely a goblin. That would make sense because the backdrop of Hogwarts Legacy is an impending goblin rebellion. Interestingly, the Harry Potter Wiki mentions that the use of Unforgivable Curses on “another human being, muggle or wizard” has been banned.

Another fan jokingly mentioned that this isn’t a Grand Theft Auto version of the Harry Potter world. In the former, players can kill NPCs indiscriminately, triggering police chases and an increasing level of wanted. While this could be added through the magic of mods, it’s extremely unlikely that anything similar will find its way into Hogwarts Legacy.

One of the most anticipated games of recent years will finally be released in the latter half of 2022, and fans are eagerly clamoring for more information on what to expect in the wizarding RPG. The Death Curse is deeply embedded in the Harry Potter mythos, and players will be eagerly waiting to see how it plays out in Hogwarts Legacy.