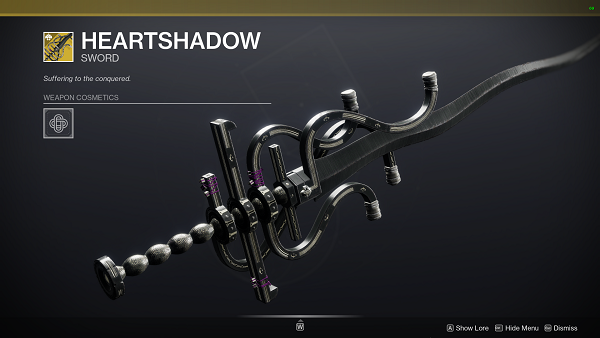 Similar to Gjallarhorn, the new exotic sword, Heartshadow, has a catalyst that can be acquired in the Duality Dungeon. The whole process is similar to Gjallarhorn: defeat an enemy to get an item, drop that item in a particular location, and repeat it several times. In this Destiny 2 guide, we’ve detailed all the steps needed to get the Catalyst for the Heartshadow.

To get the Exotic Catalyst, you need to defeat three Standard Bearers in the Duality Dungeon. Please note that these three standard bearers are different from the Psions present in the encounters. These are also named so that it is easier to spot them.

Flag bearer #1
For this one, jump to the very top of the section with the first wave of enemies. But instead of jumping to the bell in the Nightmare Realm to progress, look for the rooms on the right side, one level below the platform where you usually shoot the bell from. As for the standard, it must be placed on a plate directly behind the bell. Also, remember that all of this must be done in the Nightmare realm.

Flag bearer #2
The second appears near the end of the jump section after Gahrlan. After defeating, you will have to drop the standard in the nightmarish realm of the room in which three statues must be lined up to open the safe. The plaque will be on one of the pillars in the Nightmare realm.

Flag bearer #3
For the final standard bearer, you need to open the safe and continue to the section where you need to shoot a bell behind a fence and then jump on it. Instead of jumping to the bell to advance, head to the far right of the area for the Standard Bearer. You need to place this banner in the area with a lot of enemies standing on beams. It’s just before sliding to a jump section leading to Caiatl.

Once all three standards have been dropped, you will get the Exotic Catalyst for Heartshadow.

But what does this exotic catalyst do? It increases your movement speed while invisible. To complete it, you will need a total of 400 kills. This can easily be done when encountering Shuro Chi in the Last Wish.

That’s all we have in our Destiny 2 Heartshadow Catalyst guide. Be sure to check out our in-depth Destiny 2 wiki page for more in-game help..