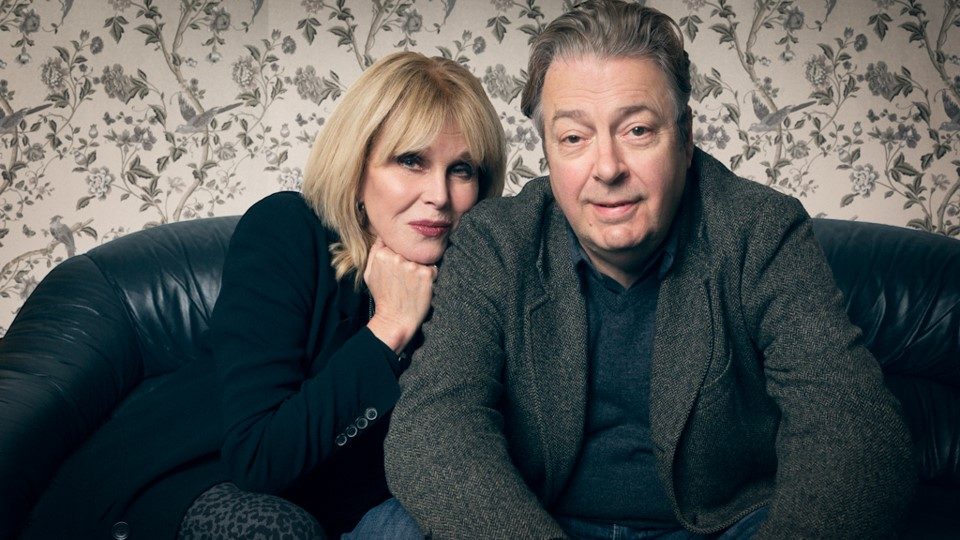 The idea for my comedy Conversations from a Long Marriage was born, oddly, out of fury. I was angry at the way older women were portrayed in dramas and comedies. Either as miserable brides, interfering mothers-in-law, bitter ex-wives, control freaks and nasties – or technophobic granny in bibs, frequented by the whole family.

“Go on!” I was screaming on my radio and my TV. “Where are my contemporaries? The strong, smart, funny women who have laughed and loved their way in life, since the Summer of Love and who could still be married to the sexy hippie they met at Glastonbury 71?”

We may be senior train pass holders, but we turn on the car stereo, sing along with Marvin Gaye, and still dance the streets with Martha Reeves and the Vandellas.

Yet we were not represented anywhere. So I wrote a series myself, about a woman I recognized, who had my references. I placed her in a long marriage that was still sparkling with passion for life, music, wine and yes, sex – and I knew who I wanted to play her.

Joanna Lumley embodied how we all want to grow old. Not just beautiful but committed, curious, warm, intelligent and funny. Thank goodness she said yes, because I had no choice of backup!

I asked her who she wanted as a husband – and I held my breath. Joanna said, “All my friends want to marry Roger Allam.”

Hooray! My choice too! And the Dream Team was born – dazzling actors, with two of the best voices in broadcasting.

In 2017 we recorded a pilot episode and when I saw these two on the mic for the first time, I couldn’t help but smile. I have a schoolgirl crush on both of them. Their chemistry was obvious, they really love each other. There’s a lot of banter, flirtation and laughter in the studio – and that’s before we even get started – but the calm, confident skills of our producer, Claire Jones, miraculously manage to pull it all together.

I’ve always planned Conversations from a Long Marriage for Two, about a couple talking, when no one else can hear. There are occasional one-sided phone conversations, but no other characters and certainly no neighbors barging in, uninvited.

It’s mundane at times, as they bicker about trash cans, loading the dishwasher, and the etiquette of saying goodbye at the front door, but scattered across the 18 episodes of the three series until present, we learn their history. A tragic miscarriage shortly after they met left them childless, they each took a detour down the marital highway, broke up, got back together and still today there are jealousies and dramas that fuel passion and humor.

I’ve been writing comedies for over 35 years – and I’ve Radio schedules thank you for launching my career. My husband, Gavin Petrie and I, both journalists, submitted a script to the Radio Times “Sounds Funny” competition in 1987. The judges were Victoria Wood, Prunella Scales and Douglas Adams (creator of Hitchhiker’s Guide to the Galaxy). We won! The price was £2000, which we spent on a stair mat and a juicer. As Gavin was editor of RT rival TV Times at the time, it provided plenty of mirth. This led to our first (quite autobiographical) comedy series, Second Thoughts, on Radio 4, featuring Lynda Bellingham and James Bolam as a couple trying to keep the magic alive, while living with her two teenage boys. The series moved to ITV for 5 years and was followed by Faith In The Future, again featuring Lynda Bellingham – now divorced – living with her daughter, Julia Sawalha. This won a British Comedy Award.

Gavin and I have written many other radio and television series, including Next of Kin, for BBC Television, starring Penelope Keith and William Gaunt as grandparents raising orphaned grandchildren and although I have written myself Conversations from a Long Marriage, I asked Gavin’s opinion, “What do you think is the secret to a long and happy marriage?”

He replied quickly: “You tell me and I agree”. It made me laugh – that’s probably why we’re still together.

As one listener said, “It’s wonderful to be the target audience for a change. We get all the references and it features an older couple having fun – and loving sex.”

I’ve been delighted by the ecstatic reception of Conversations from critics and listeners alike and if I’ve learned one very important thing after four years of working together, it’s that when a picture is taken, never, already standing next to Joanna Lumley.

You can’t do anything without good writing. As soon as I read the first script, I thought: this is the one. I said yes!” because of the writing… and Roger Allam.

I love playing Her (they don’t have names) but we’re not the same. She is more dispersed than me, and more curious. What’s really wonderful is Jan’s uncanny ability to mimic speech patterns, so it’s easy for me to say his lines like they just popped out of my head. I love her, however: and I love being Her.

Roger Allam plays my husband. I am his servant: I think the world of him. Now that we’re playing from iPads and not scripts, I kinda miss the intimate page-turning sharing routine we had devised. The brilliance of the writing makes it easy to play each other, to love each other, to have quarrels and jealousies and reconciliations. He’s a wizard and very dry and funny.

People really love Conversations: they listen faithfully to each episode and look forward to the next batch, and I’ve never encountered that before with radio. A woman told me that by doing long and tedious manual work, she had listened to the first two series in full. Everyone who hears them seems to be delighted.

What people tell me the most is: Does Jan Etherington have some kind of spy ring listening to our marital conversations? They all feel so real, fresh, relevant and – grim word – approachable. Jan has the eyes of a hawk, the ears of a bat and the feather of an angel. I want them to be forever in the mind’s eye, which is on the radio, where you can imagine everything; the two of them, and what they look like, and how their house is furnished…. Television removes all possible doubt and conjecture, and in any case, we might disappoint (me, not Allam: Allam never disappoints)!

The conversations are very funny and made me laugh. It also meant the opportunity to work with Joanna, which I had never done before. I love doing radio and I don’t have so many opportunities these days.

Do I sympathize with my character? A man whose mind makes appointments that his body can no longer hold? Oh, I understand his pain. A man who constantly tries to impress his attractive and beautiful wife? Tell me about that.

Being ‘married’ to Joanna has absolutely been the perfect partnership and a total joy so far, but I’m afraid now that she’s become a duchess – or whatever – that we have to tape the next series in a hall of the throne and I will be expected to bow, scratch and walk backwards in his presence. Fortunately, I have very good knee pads.

It’s absolutely brilliant that we’ve had such a great response from listeners and critics – it means we can do more.

Conversations from a long marriage can now be broadcast on BBC Sounds. VCheck out our TV guide to see what’s playing tonight.

This feature originally appeared in Radio Times magazine. For the biggest interviews and top TV listings, subscribe to Radio Times now and never miss a copy.