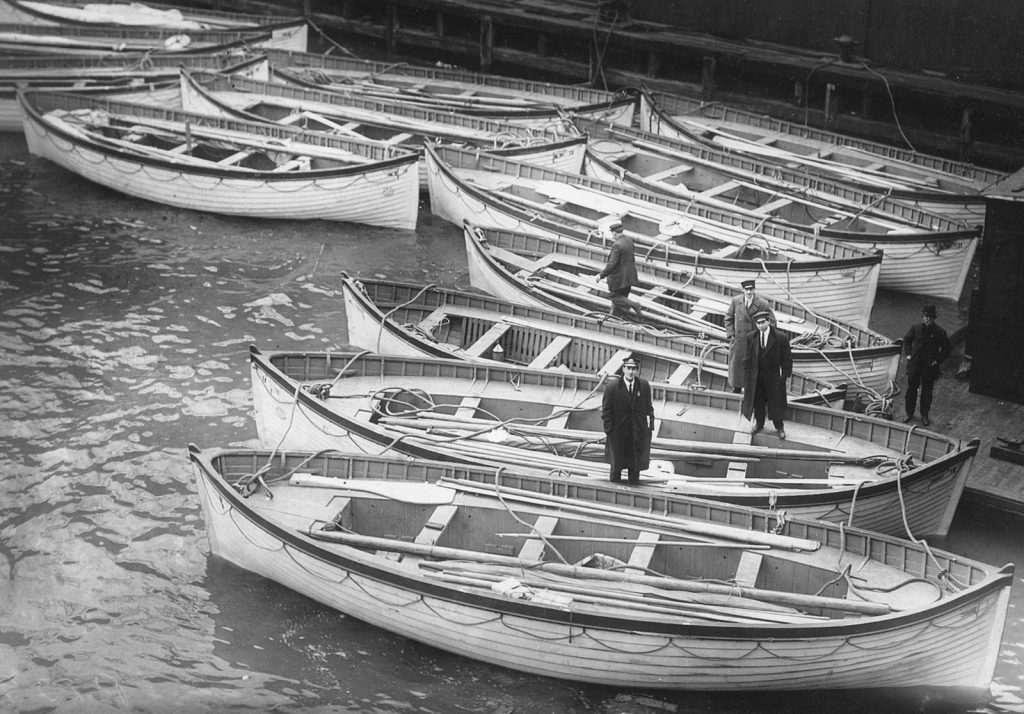 Titanic lifeboats at White Star Lines Pier 54 in New York after the sinking, via Wiki Commons

When you hear “Titanic” you might think of icebergs, tragedy, Jack, Rose and a two hour fight between life and death in the North Atlantic, some 375 miles off Earth. -New. You may not necessarily be thinking of New York. But the ship, which left Southampton, England on April 10, 1912, was bound for New York and was due to land at Pier 59 on April 17. After sinking in the early hours of April 15, the Titanic never gave birth in New York, but survivors of the tragedy sailed through the city aboard the Carpathians April 20 and disembarked at Pier 54. Ultimately, New York’s connection to this fateful voyage extends far beyond its waterfront. In fact, you will find sites associated with the Titanic and its passengers throughout. the city.

1. Pier 54 and White Star and Cunard buildings on Broadway

The crowd at the gates of Pier 54 awaiting the arrival at the Carpathia, via Wiki Commons

Pier 58, a White Star Line wharf that was supposed to serve as the Titanic’s last port of call, has long been incorporated into Chelsea Piers. The remains of Pier 54, a few blocks to the south, still serve as a ghostly reminder of the wreckage. 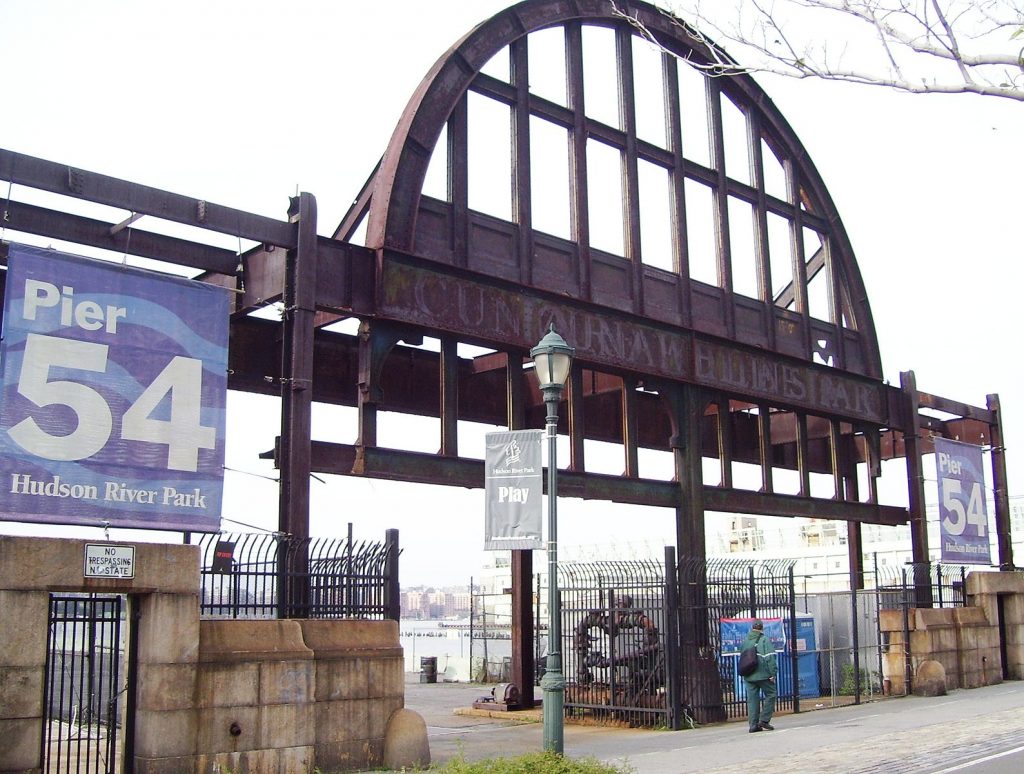 Further into the city center you will find the Cunard and White Star buildings. Lower Broadway was once home to a veritable procession of steamboat offices, where travelers could book passage to a number of ports around the world. The White Star Line was stationed at 9 Broadway and the Cunard Line at 25 Broadway. In 1912, friends and family of travelers aboard the Titanic flooded offices looking for information about their loved ones. 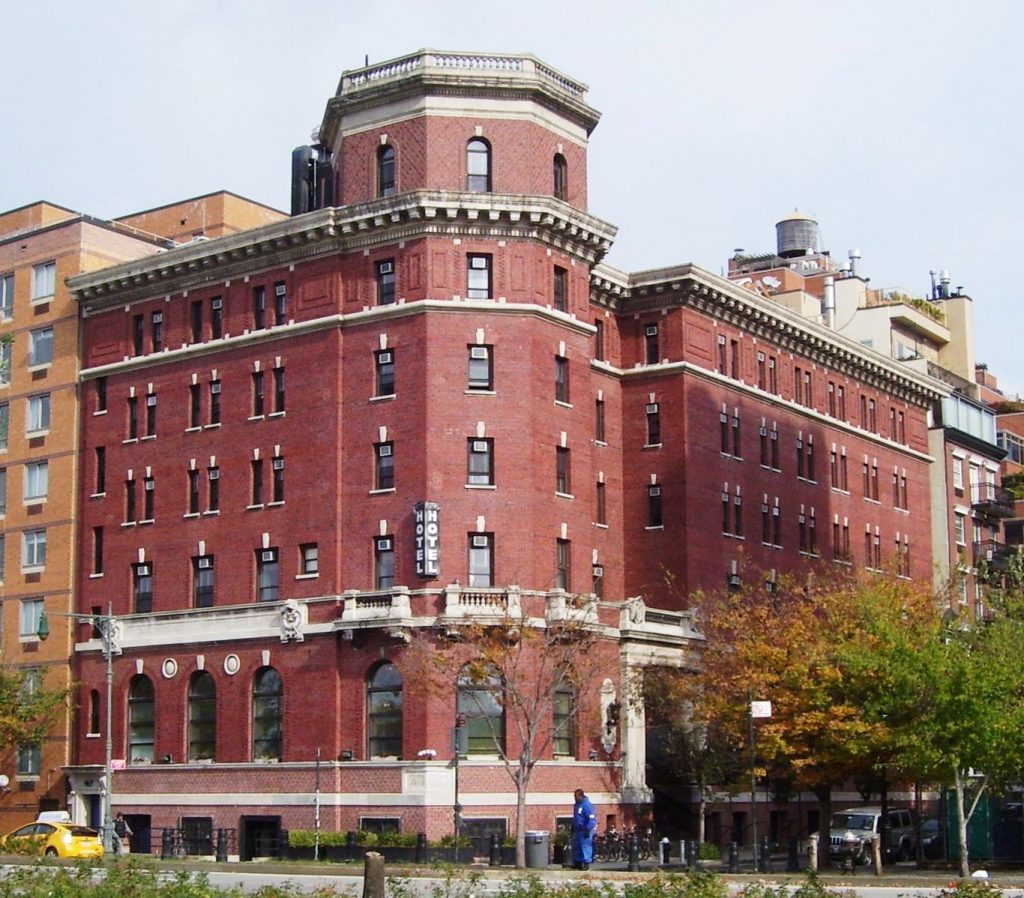 The Jane Hotel, via Wikimedia

The American Seamen’s Friend Society Seamen’s House and Institute at 113 Jane Street was across from Pier 54 on the west side of Manhattan. The building is now the Jane Hotel. Since the Home and Institute was located a short walk from where the Titanic survivors disembarked and was an institution devoted to sailors and old salts of all stripes, the Institute provided food and accommodation for the surviving crew of the Titanic and some of its passengers. The home also hosted a memorial service for the victims of the Titanic, with over 100 survivors in attendance.

The building was built for sailors and has retained many of its nautical touches, including anchors above the doorway and life jackets on the facade. Additionally, the Institute’s 156 original guest rooms have been designed to mimic cabin-aboard a ship, a tradition the Hotel Jane maintains to this day. 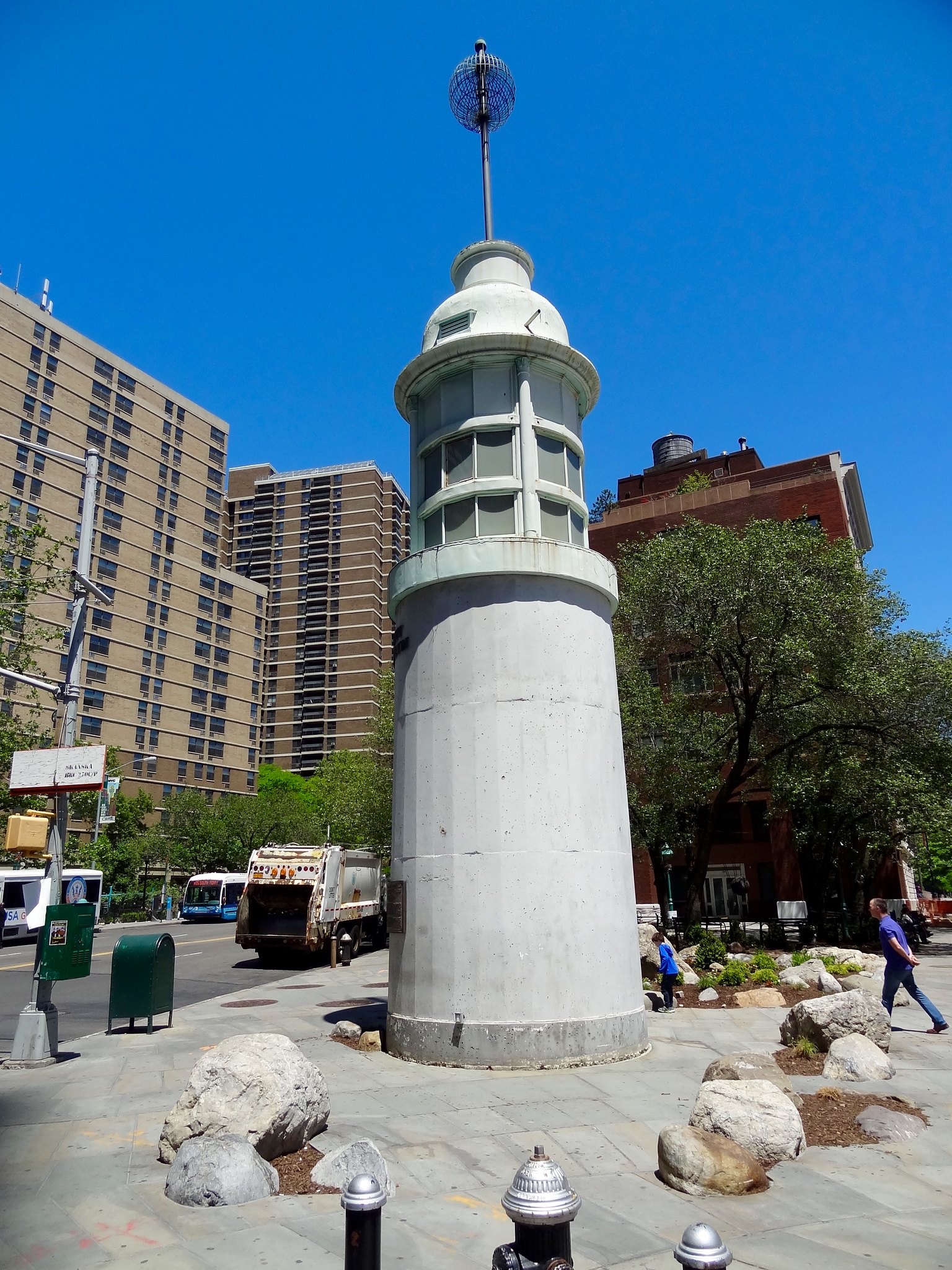 The lighthouse, funded by public donations, was built by the Seamen’s Church Institute and opened in 1913, a year after the sinking. Originally, the lighthouse was a fully functional lighthouse for the sailors who plied the harbor. He stood atop Seamen’s Church Institute at 25 South Street, and his green light was visible all the way to Sandy Hook. The Lighthouse Memorial was donated to the South Street Seaport Museum in 1968 and moved to its current location in 1976. 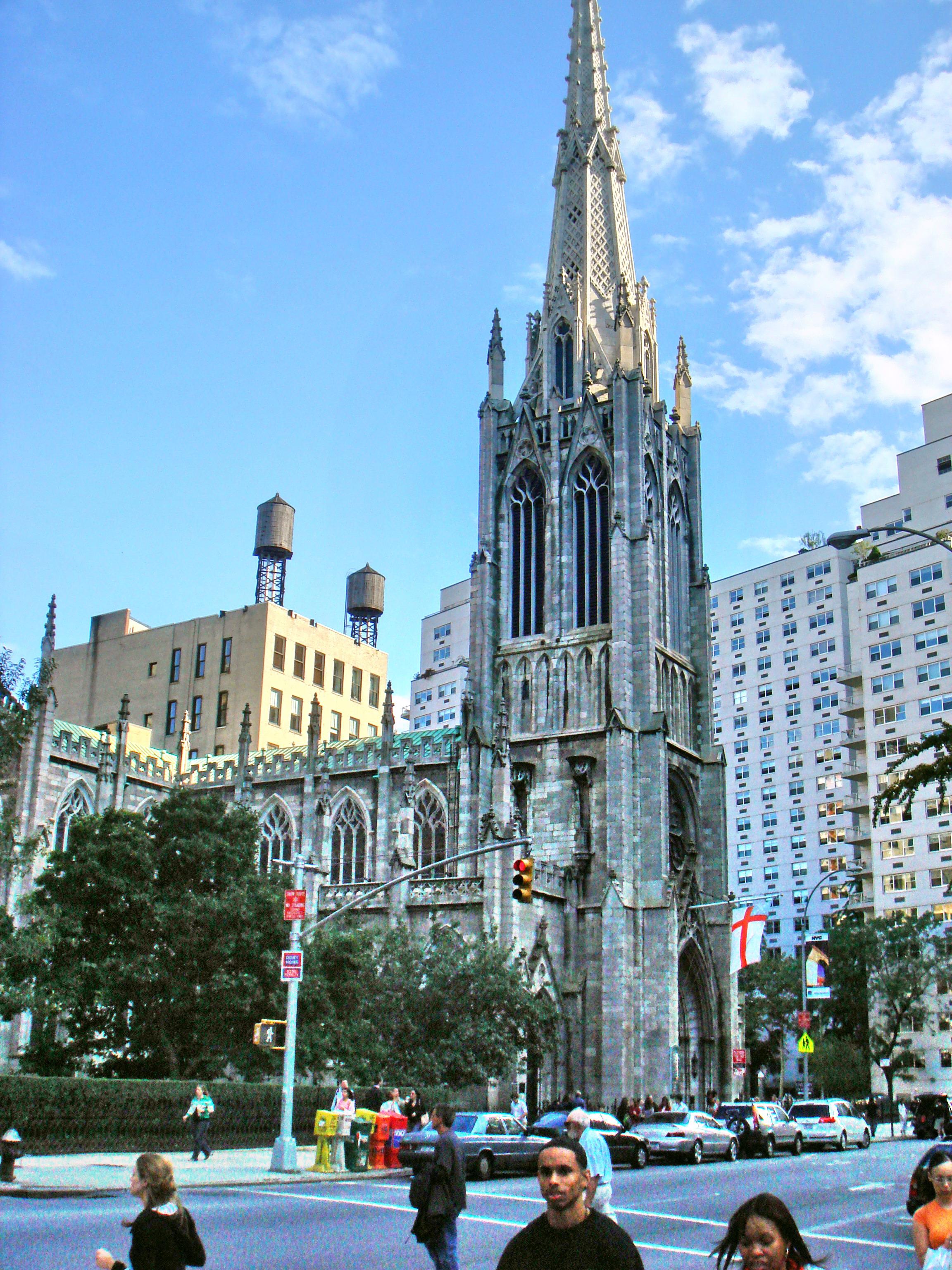 There are several other memorials in the city that honor specific passengers who lost their lives on the Titanic. One is the Edith Corse Evans Memorial at Grace Church at 802 Broadway. The inscription on a stained glass window to the left of the hall reads as follows: “In thanksgiving to God for the memory of EDITH CORSE EVANS who, in the middle of life, gave himself for others on the Titanic April XV MCMXII doing trust in him who made the depths of the sea a means for the redeemed to pass through. Love is as strong as death.

Evans, 25, was one of four First Class passengers to die on the Titanic. There are several accounts as to why Evans didn’t get to a lifeboat: one says she helped her aunt get on the last lifeboat, urging her to get on board first because she had children waiting at home; the boat was then lowered without Evans. Another said there was only one seat left and Evans insisted that his aunt take it so that she could come home with her children. A third says the two women boarded the lifeboat, but it became overcrowded and Evans volunteered to leave the lifeboat. The Memorial honors his selfless choice. 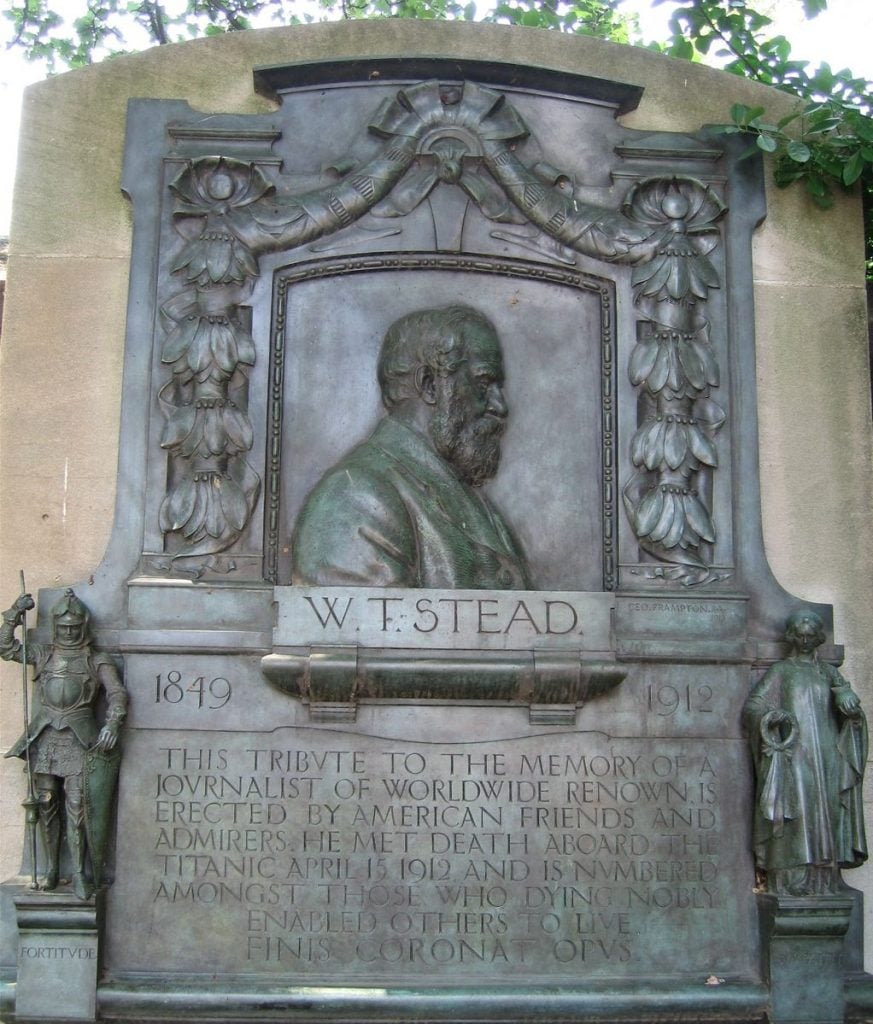 The William T. Stead Memorial, located at 91st Street and 5th Avenue, is built into the wall outside Central Park. The modest memorial is actually a 1920 copy of the 1913 Stead Memorial on the London Quay.

Stead was an English journalist who tackled corruption, dabbled in spiritualism and pleaded for international peace. He had proposed a permanent international peace organization and was sailing aboard the Titanic because President Taft invited him to speak at a peace conference at Carnegie Hall. After helping others get on lifeboats, he quietly retreated to the First Class Smoking Room to read as the ship sank. 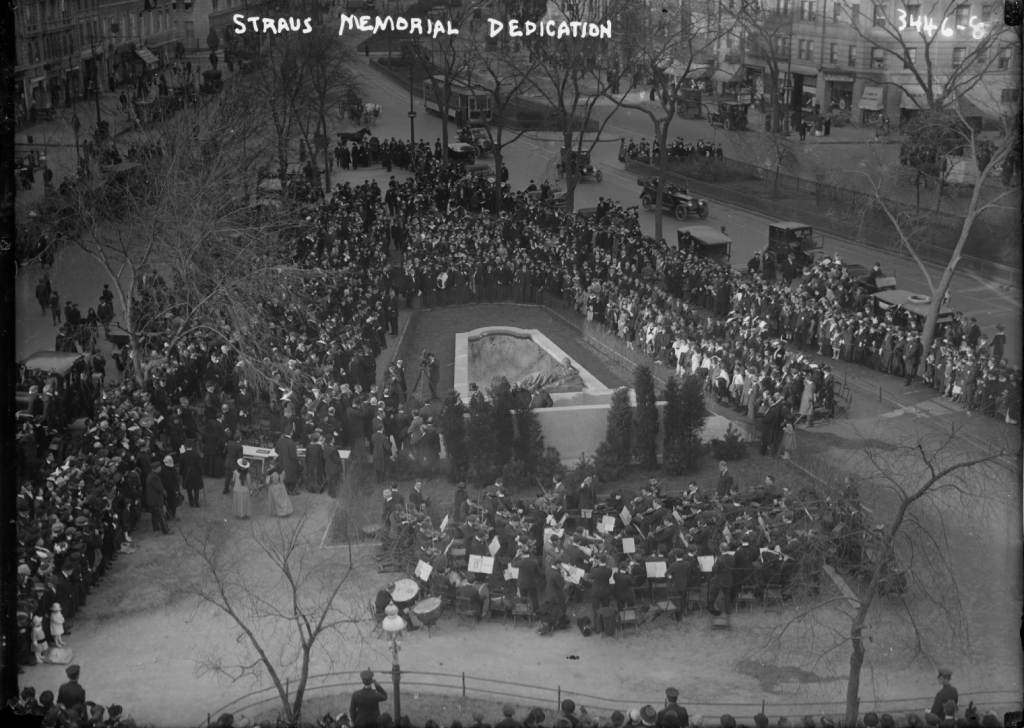 Dedication of the Straus Memorial, via Wikimedia

Straus Park and Memorial are located between Broadway and West End Avenue, between 106th and 107th Streets, near the former home of Isidor and Ida Straus on what is now 924 West End Avenue. Isidor Straus moved with his brother Nathan to New York in 1871. The duo transformed American retailing, and Isidor is credited with creating the modern department store. The couple were part of Abraham and Straus of Brooklyn, and the brothers took over Macy’s in 1896. Straus was also a New York congressman and president of the Lower East Side Educational Alliance.

The Straus Memorial decorated for the 100th anniversary of the sinking of the Titanic in 2012, via Wiki Commons

The couple were both offered seats in a lifeboat, but Isidor turned down a place for himself as the women and children had yet to be rescued. He urged Ida to leave without him, but she did not. The couple’s memorial service drew 40,000 mourners and Andrew Carnegie was among the speakers delivering a eulogy. The granite and bronze memorial features a reclining woman at rest, modeled by Audrey Munson, better known as Miss Manhattan. 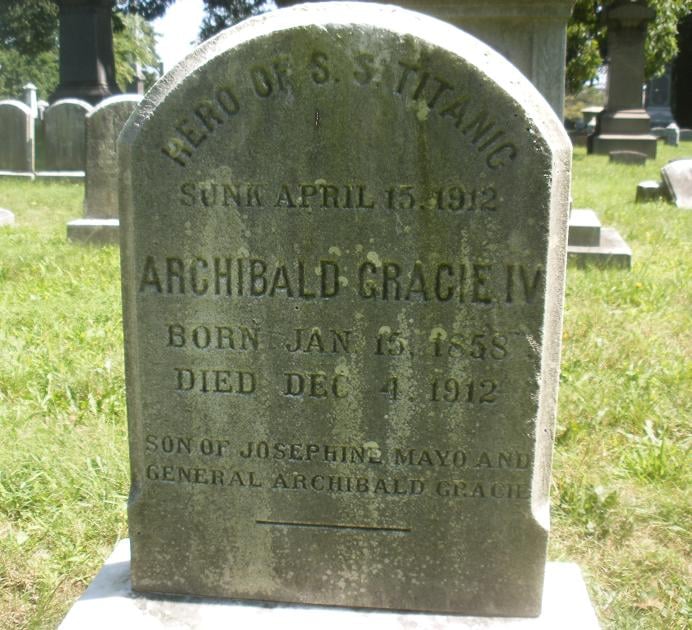 Archibald Gracie IV, another high profile New Yorker aboard the Titanic, was a direct descendant of the first Archibald Gracie, whose home, Gracie Mansion, is now the residence of the city’s mayor. Gracie sank with the ship while working to fill lifeboats with women and children. While in the water, he was able to grab an overturned lifeboat and survive until the next morning when the lifeboats arrived. Although he returned home, he died eight months later. His grave in Woodlawn Cemetery reads: “Hero of the Titanic”. 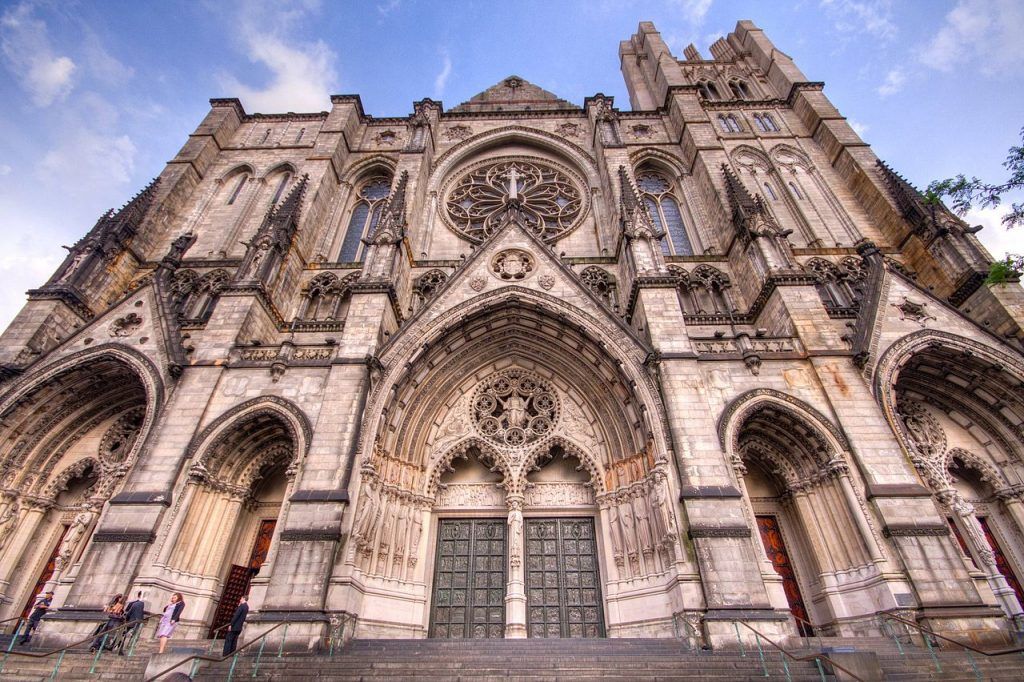 Saint John the Divine, via Wikipedia

Gracie was not the only fourth-generation descendant of an extremely high-profile New York family traveling on the Titanic. John Jacob Astor IV was perhaps the most famous passenger on board. The Astors made their money in real estate, and John Jacob Astor IV built properties as important as the Astoria Hotel, the Saint Regis, and the Knickerbocker.

Astor’s body was identified by the gold watch, diamond cufflinks, and diamond ring he wore. He is buried in the upper town cemetery of Trinity Church in Washington Heights. His death is commemorated in the Astor Memorial Window in Saint-Jean-le-Dieu Cathedral.

Benjamin Guggenheim, brother of the museum’s namesake Solomon R. Guggenheim and father of art collector Peggy Guggenheim, also perished when the Titanic sank. He helped other passengers into lifeboats, then put on his best tuxedo so he was “ready to go down like a gentleman.” Guggenheim and his valet met their fate in the Grand Staircase, sipping cognac and smoking cigars. 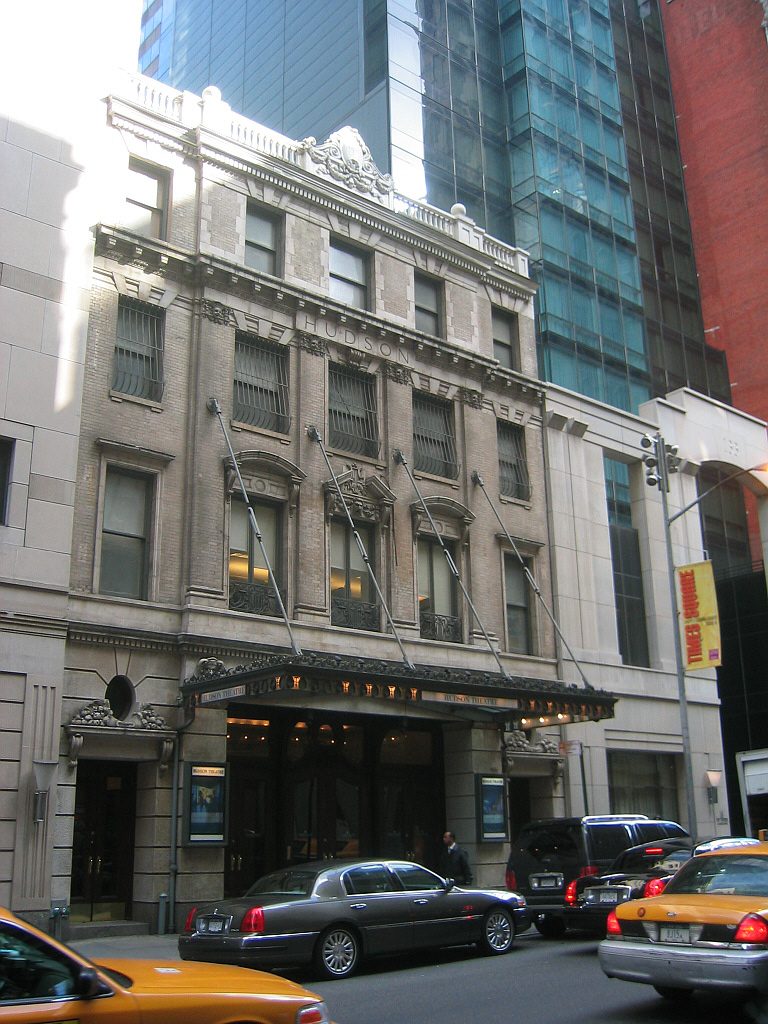 Given that the Titanic disaster provided such rich fodder for dramatization, it is quite fitting that some passengers have some deep connections to the New York theatrical scene. The Hudson Theater at 141 West 44th Street was founded by Henry Harris, who died on the Titanic. Harris was a director of the Theater Managers’ Association of Greater New York and a Freemason. He was traveling aboard the Titanic with his wife Irene, who survived.

Irene Harris took over the management of the Hudson Theater and became the first female theater producer in New York City, helping to launch the careers of artists including Barbara Stanwyk. She died in 1969 at the age of 93.

Lucie Levine is the founder of Parade Archives, a local touring and events company that aims to bring New York’s fascinating history out of the archives and onto the streets. She is a New York native and licensed New York City tour guide with a passion for the city’s social, political and cultural history. She has worked with local partners including the New York Public Library, The 92nd Street Y, The Brooklyn Brainery, The Society for the Advancement of Social Studies, and Nerd Nite to deliver exciting tours, talks and community events throughout the region. city. Follow her on Twitter and Instagram.